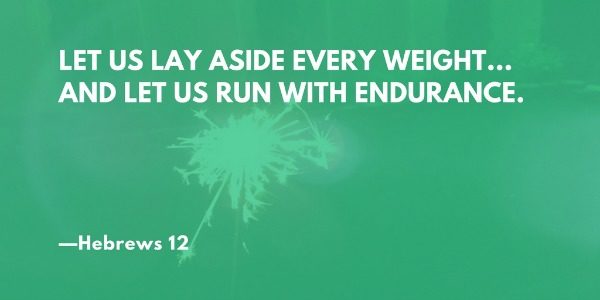 Dependence of church members on civil government for material support should be avoided if possible, especially where such dependence would interfere with the Christian’s freedom to testify to the government of Christ.” —Friends of Truth / Glenside Friends Meeting, Christian Conduct

Therefore we also, since we are surrounded by so great a cloud of witnesses, let us lay aside every weight, and the sin which so easily ensnares us, and let us run with endurance the race that is set before us…” —Hebrews 12

I know people who run races with giant tires chained to their waists—by choice. It’s resistance and strength training, and it works.

It’s also entirely voluntary. After their training and races are over, they take the tires and the chains off. They don’t walk through their entire life weighed down.

I’m learning from them, from my Quaker siblings, and from the writer of Hebrews.

The early Quakers interpreted this principle in terms of being bonded to the state, but it doesn’t only have to refer to those kinds of entanglements.

It could also mean not accepting work that you know includes ethical conflicts or people who’ll hamper your ability to resolve those conflicts. It might mean reconsidering your relationships and finally replacing old relational habits.

Cutting unnecessary ties and shedding unnecessary chains means relieving yourself of those “weights” that limit, discourage, and repress rather freeing and inspiring you to walk out your best values and sense of call.

I love that this verse follows a long account of community heroes—that “cloud of witnesses.”

As we change our lives, we’re in good company. Trimming connections that “hinder” you can just as easily mean walking in the footsteps of elders, mentors, colleagues, and friends. It doesn’t always have to mean stepping away from the known world into isolation.

Seek out the stories of those who’ve followed the paths you’re on. Situate yourself in their midst and allow them to nourish you. And then “run,” as they did, “with endurance.”