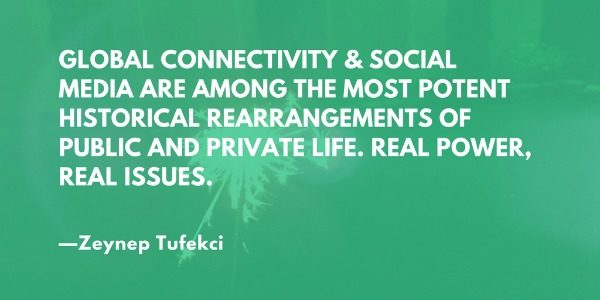 I first read the phrase “context collapse” from civic tech analyst Zeynep Tufekci and sociologist Tressie McMillan Cottom. For more than six years, Zufekci and Cottom have each written about how social media popularity collapses the boundaries between digital audiences.

By becoming extremely popular (“going viral”), information shaped for one audience can rapidly become information shared with all audiences. Even if an item’s original audience was sympathetic, once that item has gone viral, there are no guarantees about how it will land with its new audiences, which features they’ll fall in love with, and which they’ll reject, or why.

The images, actions, and words captured by the lens at any moment can be transported to anywhere on the planet and preserved (the performer must assume) for all time.” —via Tom Critchlow, April 30, 2017

There are also costs to that heightened connectivity, and we don’t all share the costs equally.

As Tufekci wrote last spring, the same information highway that makes minoritized communities more visible and thus more vulnerable is the same network that fundamentalists and supremacists use to find one another and spur each other on.

Being social creatures means scanning our spaces for contextual clues: what, where, with whom, and why. Going viral means collapsing the boundaries that give each group its unique shape, and losing that context means losing perspective that would allow us to perceive others more accurately.

In fact, virality can often make it harder to interpret the Other. In the absence of local cultural knowledge, projection dominates and we all default to our habitual ways of telling stories.

In 2011, Facebook users were starting to express feelings of being over-exposed. and we were self-censoring to mitigate that sudden and non-consensual exposure. (I was one of these users.) Posts we create for our private pages become posts that our followers ask our permission to share, and a share from the right or wrong reader or mediator can mean the difference between open hearts and shiny eyes and a whole army of orcs in the comment section!

Consider what you know about original context as you encounter new stories and sources: how clear is it that these stories were designed for a different audience than the undifferentiated public? In what ways are you “reading other people’s mail”?