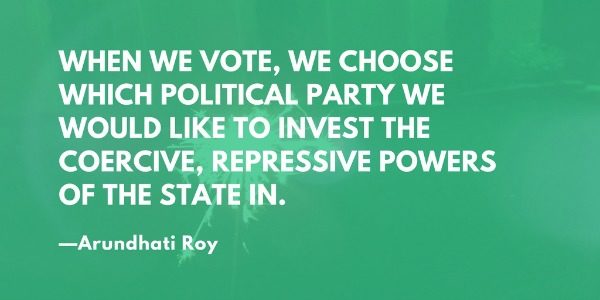 That’s what I wrote in the margin of Arundhati Roy’s The End of Imagination today when I read Roy’s critique of the political system in India, the electorate’s party choices, and the pervasive oppression of “counter-terrorism.”

In the post-9/11 world, power works in very consistent ways whether in India or the US: power represses, and repression corrodes relationships.

Roy outlines the Indian “Prevention of Terrorism Act” (POTA, 2002-2004), and its provisions were very similar to the network of policies, laws, and policing regulations that the United States has implemented since 2001: invasions and bombings of the Other abroad, mass surveillance and monitoring of the Other at home, heightened security in transportation, new identification document laws, and restrictions on travel and migration.

And as I read that law’s violent consequences for poor, Muslim, leftist, and marginalized people in India, I can see how these implications applied just as much within the US as beyond its borders. Power is consistent.

The Indian state’s proclivity to harass and terrorize people has been institutionalized, consecrated, by the enactment of the Prevention of Terrorism Act (POTA), which has been promulgated in ten states… POTA allows confessions extracted in police custody to be admitted as judicial evidence… police torture tends to replace police investigation.” —Arundhati Roy

Roy argues that the judicial system is compromised when the state uses force to compel minoritized people.

If that’s the case, however, and force is ubiquitous, is there justice anywhere?