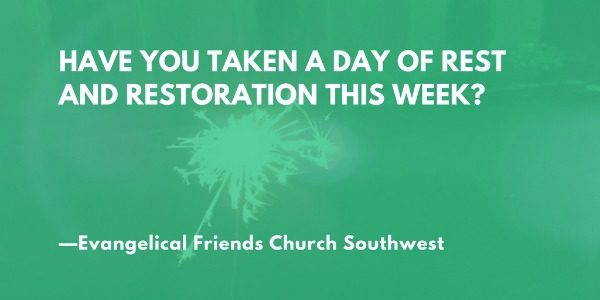 Sometimes it can be helpful to read one of my cultural traditions from another perspective. I’ve read most about the Sabbath recently from Jewish writers and evangelical Protestant theologians.

But today my devotional brought me this query from Quakers in the southwest region of the United States:

Have you taken a day of rest and restoration this week?” —Evangelical Friends Church Southwest

Why, yes, I said to myself. Yes, I have. And tomorrow I have the hard-won privilege of being able to take another.

On International Worker’s Day six days ago, many around the world commemorated the rights, regulations, and conventions that labor movements have fought for over the last few centuries.

The standard eight-hour work-day—which divides the 24-hour day into equal segments for work, sleep, and free time—is one such regulation. The two-day weekend is another. I’ve valued it most when my jobs have required I work through either Saturday or Sunday.

(Yes, labor at churches is still labor! Ask your nearby minister.)

But evangelical Quakers aren’t asking about regular rest in solidarity with international labor. Nor are they following the Seventh-day Adventist concern for the observance of the Ten Commandments or “moral law” on a specific weekday.

Rather, the Friends’ interest is in living in acknowledgment of God throughout life:

First generation Friends on the other hand did not feel that God was calling them to observe a particular sabbath day – much to the consternation of mainline Protestants. Small wonder after their meeting for worship these Friends would open their businesses and serve their fellow humans with honesty and caring. These Friends were, in other words serving the Lord even though, government officials often arrested the true Christians for ‘breaking the Sabbath.'” —Arthur Berk

“We do not need to long for a particular day,” Berk explains. “He is present always.”

That principle of pervading presence is the community’s historical status quo, but some Friends are experimenting with the rite of disrupting their typical schedules and choosing not to work as normal anyway.

Some, like the Jewish and allied community of the Reboot initiative, choose to unplug from the internet and mobile technologies and recenter with family and friends.

Even when it’s philosophically inconvenient, humans love habit and structure. And sometimes that tendency can help us recover attention, presence, and grounding that our wider culture’s habits make it hard for us to live into every day.

Having access to these benefits shouldn’t be a matter of privilege, and part of seeking a more just world has to mean changing our social cultures so that it no longer is.