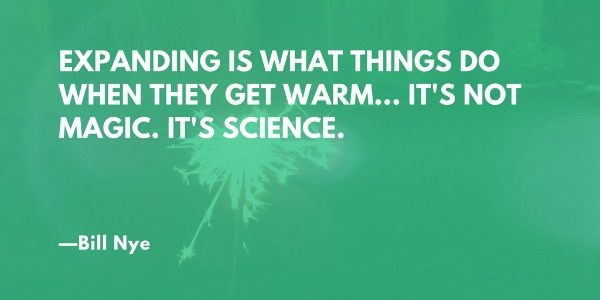 During the first episode, Nye dons a light blue lab coat and demonstrates the mechanics of climate change and the greenhouse effect.

“As I hold the bulb of this thermometer,” Nye says, “the liquid metal inside is expanding. That’s what things do when they get warm.”

That sparked a light in my head.

Across several Christian denominations lately, I’ve been watching traditionalists pull up their drawbridges and nudge—or catapult—marginalized people out into the icy moat.

In April, Adventist administrators published an awkward and unhelpful statement about transgender people. At the start of this year, Presbyterian administrators at Montreat College introduced what one community member called “an evangelical cultural litmus test,” a “covenant” for employees to sign that bound them to narrow and intentionally exclusive conclusions about women’s healthcare and family formation.

Communities collapse on themselves in the absence of kindness and curiosity—and you don’t have to be “progressive” to be kind or to disrupt your journey through the world long enough to stop and offer care to someone who needs it.

Coldness inspires harshness and an unwillingness to learn with others. It provokes us to assign mean interpretations to each other’s actions, and it discourages us from growing.

But when people are warm, persistently, wholeheartedly warm, the future becomes wide enough to belong to all of us.

As Nye said it first, that isn’t magic. It’s science.