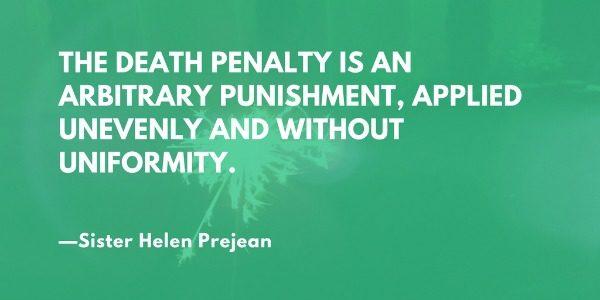 Sr. Helen Prejean, a member of the Congregation of St. Joseph, is the face of Ministry against the Death Penalty and author of Dead Man Walking and The Death of Innocents: An Eyewitness Account of Wrongful Executions.

She has been mobilizing people to take action against legal executions in the United States for more than forty years, and was honored for her humanitarian activism four years ago at one of my local churches.

Sr. Prejean has been among the most vocal opponents of judicial killings during Arkansas’ recent Easter spree. As I mentioned earlier this month, the state of Arkansas initially scheduled a grip of executions for the fortnight after Easter Sunday, and the governor and others had acknowledged that their haste was due at least in part to the pending expiration of one of the execution drugs.

The United States has killed about 1,400 people as part of legal sentencing since 1976, and most of the stories of those executed don’t draw international attention.

But a few do. Troy Davis’ execution in 2011 did. The Arkansas executions have. And the popular debate about justice, judgment, vengeance, and efficiency in killing has been reignited once again.

What’s the best way to kill someone? Injected chemicals, electrical shocks, gassing, a broken neck, a firing squad’s bullets? Should we be regretful?

The first time I ever performed a series of verbal arguments on this topic was in my London high school’s English class. England refined death by hanging as its chief method of legal execution, but had begun outlawing it just thirty years before I was born.

Our entire class analyzed and debated one of the last cases that British courts applied capital punishment to: the murder trials of Derek Bentley and Christopher Craig.

Both Bentley and Craig lived locally to my school, and Bentley was hanged in 1953. He and Craig had planned a robbery and been caught in the attempt. Bentley didn’t shoot at any policeman but Craig did and two died. Bentley was convicted anyway over an ambiguous comment to his accomplice.

Of course that ruling and pardon came too late for him.

“The death penalty, if it is to be opposed, must be opposed in all circumstances, regardless of the crime or whether the offender is rehabilitated,” Australian journalist Steven Raeburn wrote in 2015. “Do we oppose all judicial killings, or only when we empathize with the convicted, or they have shown sufficient remorse & rehabilitation?”

I’ve been asking these questions of friends both in terms of state punishment and in terms of the theologies that lie under many of their responses.

After all, if our God is a god who kills, we’re made in that god’s image and can look for reasons and methods to imitate his efficiency!

That’s not the path of reasoning I’m willing to choose for myself. I think Sr. Prejean is right to challenge the death-dealing the US allows more than thirty states to do in the name of goodness, orderly community, and the honoring of moral law.

The Ministry against the Death Penalty value statement puts it like this:

We believe in the dignity and rights of all persons and recognize that government-sanctioned killing and the practice of torture is a violation of those rights and a denial of human dignity… We are committed to promoting compassionate alternatives to the death penalty, including restorative justice and funding for victims’ services. We believe that the criminal justice system in the United States disproportionately affects poor people and people of color. We believe that prison reform and the abolition of capital punishment will support necessary systemic change.” —MADP

Donate to join Sr. Prejean and MADP in their work. New Orleans’ giving day is May 2 and you can schedule a contribution to support them ahead of time.