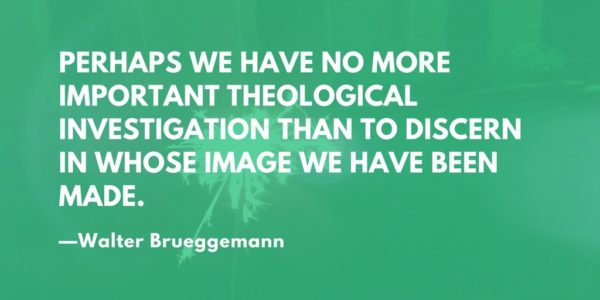 Last fall, I learned from Professor Jean Sheldon about why it’s important to be choosy about one’s ideals, mentors, models, and gods.

“The picture I have of God today,” Sheldon wrote, “is the photograph others will take of me tomorrow.”

People may well rise to the level of their gods. We only rise higher or stretch further when extremely motivated. It’s too uncomfortable to do otherwise and there’s every possible social justification not to!

In his book on prophecy, imagination, and hope, another Old Testament professor addresses the same point Sheldon did:

If we gather around a static god of order who only guards the interests of the ‘haves,’ oppression cannot be far behind. Conversely, if a God is disclosed who is free to come and go, free from and even against the regime, free to hear and even answer slave cries, free from all proper goodness as defined by the empire, then it will bear decisively upon sociology because the freedom of God will surface in the brickyards and manifest itself as justice and compassion.” —Walter Brueggemann, The Prophetic Imagination

Just as belief has practical consequences, so too claims of freedom should have material outcomes. M. Shawn Copeland once explained that we’re “freed for something,” not for freedom’s own ideological sake.

Our freedom isn’t to mimic the predictable patterns of the already is. There’s unpredictability, invention, and imagination in freedom. We’re free, instead, to live out an alternative: “a new social community in history,” and a new material reality.

Freedom means not leaving our ideals in their original packaging, never to be tested. It means being able to pull them out of the box, let the air and wind hit them, and get them as dirty as the construction materials they are.

It’s a vision that’s frightening only to empire and those of us whom empire has well-trained.