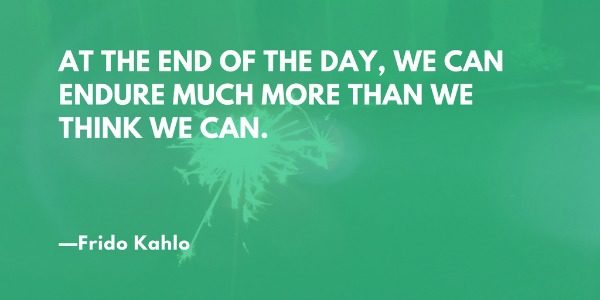 Each of these virtues draws praise in an era that worships the rugged individual who conquers circumstance with dogged will and fortune (but mostly dogged will).

It may be true that “we can endure much more than we think we can.”

It certainly isn’t true for everyone.

And it’s an idea that, even under the aegis of common penal rhetoric like “no pain, no gain,” we don’t really want to test.

I have limits, and I’m sure Kahlo’s right that I’m more limited by what I think my limits are than by what they actually are.

But I don’t want to know how much we can endure, not when I watch what my siblings in Syria and Egypt and Myanmar and Michigan and South Dakota are enduring already.

Perhaps the reassurance that we can endure trauma motivates some people to hold their courage through it all. I’m hoping instead that it doesn’t give the rest of us cover to stand aside and merely look.

We need one another to do more than that. Much, much more.

MEGACHURCH PASTOR: The only thing we can do about the mess in this world is offer it up to God.

ME: [raising my hand in the back] Actually