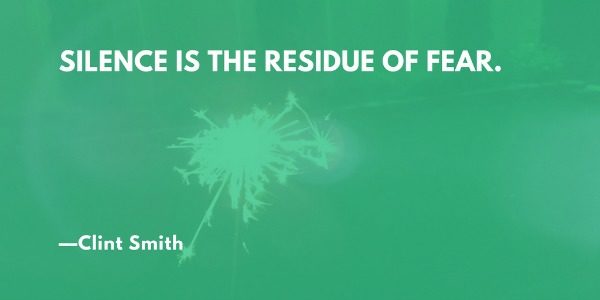 For about three years, I took spiritual refuge in an unprogrammed Friends (Quaker) meeting in West Texas.

The meeting didn’t own their own facilities, so we either met for worship in the children’s education rooms of a local community church or had brunch and bible study at the clerk’s home.

Each time, we all settled into silence for an entire hour.

The hour isn’t quite group meditation. It may include prayer. It is an hour of communion, attention, and what some writers call “expectant waiting.”

Perhaps through that silence, a member becomes moved to share an insight, thought, or line of scripture or poetry with the rest of the meeting; perhaps not. I never was so moved, though I did sometimes jot down notes and thoughts for myself.

Maintaining silence wasn’t so hard for me. My challenge was discerning whether my breaking silence to speak would improve on that silence or not.

Western culture values action over stillness and voice over silence. So silence, like bystanding, often stands in for failure: a failure to act, a missed opportunity to contribute. The violence of silence or silence as inaction and passivity was one of my writing and speaking themes last year.

Failure isn’t the quality of silence I’ve experienced with Friends. It’s closer to the quality of silence I grew up with in my own Adventist churches: a musical track not quite queued up right, a nervous singer filling in the spaces, platform speakers uncertain who speaks next, ad libs to cover their confusion or congregational impatience.

There was a fear of lost control and disrupted order: if we didn’t pour sound into silence, who knew what might happen?

After years of compulsive speaking and activity, I take refuge in attentive silence. I also think it’s important to acknowledge other kinds of silence and the weight they can force onto marginalized people.

That quality of silence is what poet and author Clint Smith spoke to in “The danger of silence,” presented at a New York TED event in 2014.

Click the video below to watch Smith in full flow: he includes a timely reference to the season of Lent, which ends next week.