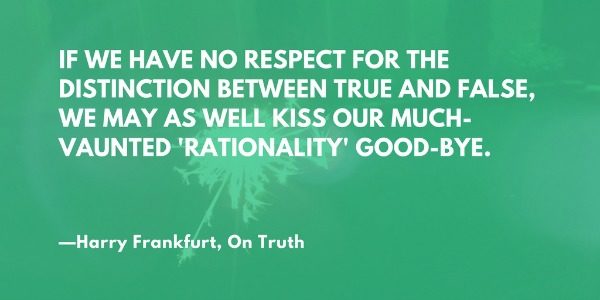 Truthiness, post-fact, and BS have all become jargon terms in political communication. I’m not sure any of us expected that from the new millennium seventeen years ago.

But then we lived through presidential perjury (Clinton), yellowcake uranium (Powell), and an entire decade of popular distrust for the state. We haven’t recovered.

That brings me to the successful campaign of No. 45 and the ongoing decline of a fourth estate that’s proven ill-equipped for misinformation, disinformation, or a public that sees conspiracy even in accurate statistics.

Princeton professor Harry Frankfurt has been writing about truth and BS since 2005 (I received one of his monographs as a graduation present a few years ago).

Sincerity is no measure of fact, Frankfurt argues in both of his books. It doesn’t matter whether all the crowds around the emperor sincerely imagine him clothed. What matters is whether he’s clothed or not; what matters—especially for the sake of social community—is the climate he’s created that discourages people from recognizing what’s real or speaking openly about it. That matters.

In On Truth, Frankfurt explains that maintaining a sense of reality is what allows reason and logical reasoning to stand. Without truth or fact, the process of tying premises to evidence or evidence to conclusion becomes the process of telling another story in a world of fireside stories—but without the solid ground of shared meaning that mythology usually relies on.

The liar is inescapably concerned with truth-values. In order to invent a lie at all, he must think he knows what is true. And in order to invent an effective lie, he must design his falsehood under the guidance of that truth.” —Harry Frankfurt, On [BS]

Not everyone is constrained by reality in this way, but Frankfurt argues that everyone should be and we collectively suffer as long as everyone isn’t.

[The BS-er] is neither on the side of the true nor on the side of the false. His eye is not on the facts at all, as the eyes of the honest man and of the liar are, except insofar as they may be pertinent to his interest in getting away with what he says. He does not care whether the things he says describe reality correctly. He just picks them out, or makes them up, to suit his purpose.”

At the root of BS, then, is capriciousness and self-interest—and a healthy society can’t be built on these foundation stones.

Read more from Frankfurt on truth and its alternatives, and if you’d like to dig into related science, listen to David McRaney’s podcast with Gordon Pennycook (no transcript available).