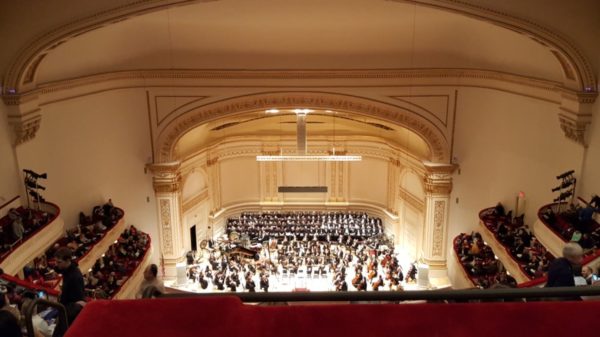 I’ve been reading about the life and death of Jesus since I was about three years old. And I spent many Friday nights during my childhood singing my way through all six cassette tapes of Handel’s Messiah (only Hogwood’s interpretation of the 1754 Foundling Hospital version will do!).

Like the Nativity story in December, the Passion (betrayal-to-resurrection) is familiar ground for dramatists and musicians to recover at this time of year. The second half of Messiah, which many choirs perform during the Easter season, covers the betrayal, trial, murder, resurrection, and restoration of Jesus.

Composer John Adams took the well-worn Passion tale and the four-hundred-year-old tradition of the oratorio, and created something surprising and remarkable in The Gospel According to the Other Mary (2013). The St. Louis Symphony played it at New York’s Carnegie Hall tonight: a full orchestra of strings, wind, brass, and percussion, with at least 60 choir voices, a triad of countertenor narrators, and Mary (mezzo soprano), Martha (contralto), and Lazarus (tenor).

It took Adams’ postmodern, postcolonial minimalism to help me see the story in a new way. I frankly didn’t expect to experience a “third testament” that spanned millennia thanks to sources like the Hebrew and Christian scriptures, the poetry of June Jordan and Rosario Castellanos, the journals of Dorothy Day, and the visions of Hildegard of Bingen.

I recognized the tale of Lazarus’ death and resurrection in all its chilling, creepy weirdness. I felt the building amoral energy of the mob at Golgotha. I heard the gentle transformation of the resurrection of Jesus, too, and I watched that story unfold mostly from the perspective of women, both ancient and contemporary.

More than I’ve realized lately, I’ve needed some disruption to my most familiar stories; I’ve needed help to be surprised.

When was the last time you told an old story in a new way? What did that disruption do for you?