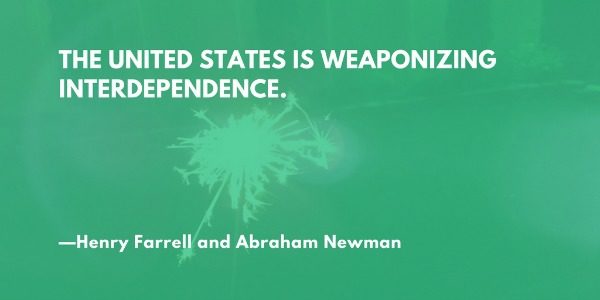 From the Washington Post today: “The United States is weaponizing interdependence.”

We live in an interdependent world, where global networks span across countries, creating enormous benefits, but also great disparities of power. As networks grow, they tend to concentrate both influence and vulnerability in a few key locations, creating enormous opportunities for states, regulators and nonstate actors who have leverage over those locations.

“In this context, the United States is plausibly leveraging its control over access to U.S. airports, which are central ‘nodes’ in the global network of air travel between different destinations. It is using this control to attack the key vulnerabilities of other networked actors, by going after the central nodes in their networks (the hub airports) and potentially severely damaging them.” —Henry Farrell and Abraham Newman

But as the Conference on College Composition and Communication and the Rhetorical Society of America noted earlier this year, the free movement of people is as important to society as is the free exchange of ideas.

Good decisions also involve both careful deliberation and integrity, neither of which seems to be common practice in the public sector this year. What Farrell and Newman propose is that the US’ ban on large mobile devices and laptops to and from 10 MENA airports is at least as retaliatory as it is security-driven (it could be both, of course).

It’s a testament to our times that “retaliation” isn’t a completely preposterous idea for a new transit policy like this. If, like some of my colleagues, you’re going to have to travel to the MENA region over the next few months, consider these strategies for protecting your equipment and data.