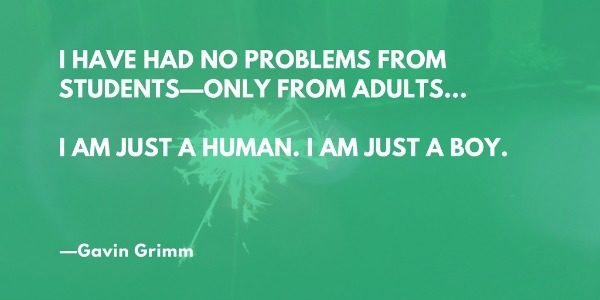 Gavin Grimm is a 17-year-old trans student from Virginia who’s finishing his last year of high school and getting ready to appear before the Supreme Court of the United States.

After parents and members of the public complained that Gavin’s school wasn’t requiring him to use separate facilities from other students, the school board held a hearing. Some of the rhetoric was atrocious, and the board’s resistance has forced Gavin to assert his legal rights to go to school, socialize with other children, and not be stigmatized by school authorities.

The American Civil Liberties Union and the ACLU of Virginia filed a lawsuit against the Gloucester County School Board for adopting a discriminatory bathroom policy that segregates transgender students from their peers. The policy effectively expels trans students from communal restrooms and requires them to use ‘alternative private’ restroom facilities.”

Some adults have been working to make this right. Today, the ACLU released a religious brief signed by more than 1,800 religious leaders and heads of faith-based organizations including Intersections International, where I work.

The weekend’s coming up. Take some time to sit with this brief and its vision of civic space that we’re all free to share no matter who we are or which religions we’re part of.