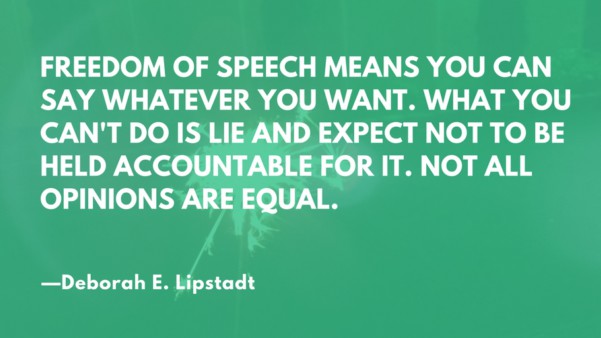 There are two films called “Denial” out this year.

One, a documentary, features climate change and the US energy system. I watched the other, a quiet drama based on a book about Emory professor Deborah Lipstadt’s legal confrontation with Holocaust denier David Irving.

In 1994, Lipstadt was traveling around the US speaking about her recent book, Denying the Holocaust: The Growing Assault on Truth and Memory. This is where the movie begins: with Lipstadt in religion classrooms and university lecture halls explaining the components of Holocaust denial, why denialism persists, and why she chooses not to debate deniers on the facts.

Denying the Holocaust mentioned Irving by name and also sharply criticized his historical arguments. Two years after Lipstadt’s press and book tour, Irving launched a libel suit against her in British courts. British law requires the person accused of libel to prove that their claims are justified or true, and so Lipstadt was forced to disrupt her teaching schedule and go to England to persuade a judge that she’d been right, that Irving had distorted the historical facts to prop up his anti-Jewish ideology.

I came across Irving’s work around the time of this case. In the early-to-mid 1990s, I was in high school and I was an avid history student. World War II cast such a shadow over British education and the UK’s orientation to mainland Europe that I couldn’t fathom anyone intentionally declaring that the Third Reich had never committed genocide.

But within a few more years, I came across people who took a similar approach to denialism about the trans-Atlantic slave trade: the Europeans didn’t enslave and export that many African people, or when they did they didn’t treat them so badly, or even if they did, what about the Irish?

Still later, I learned about those who believe that LGBTQ people don’t really face homo-, bi-, or transphobic antagonism or violence and that, in the name of tolerance, LGBTQ people conspire to corrupt and confuse children… all of whom are heterosexual, of course.

People are serious about these opinions, too.

Lipstadt recently told the LA Times that she didn’t think of Denial or her research as a volley in the game of changing made-up minds—not Irving’s and not others’. Instead she said, “What this [film] can do is confront the people who think that it’s ok to change facts as long as you call them ‘opinions’… We’ll never do away with racism,” she continued. “All we can control is how we answer it.”

Much of my work these days includes opportunities to answer people who would like me to debate them on gender, sexuality, and religion. Typically, like Lipstadt, I choose not to. I choose not to, not because I can’t, but because I’m not willing to presume any moral parity between, say, “I’m a child of God; neither my gender nor my sexuality diminish me; and I deserve to live a whole life free from violence, discrimination, and abuse” and “LGBTQ people should not live openly as heterosexuals do; should have no expectation of loving, supportive relationships in this life; and will not exist in the afterlife.”

I don’t find these opinions comparable at all. So I don’t argue about them.

Not everyone in our community declines debate, but I’m happy to leave it to those who feel called. And I take this approach to so-called controversies about several issues: orientation, slavery, sexism, climate change, and all of the scientific and technical controversies addressed in Oreskes’ and Conway’s book Merchants of Doubt.

As a person of conscience, I accept that respectful conversation has standards that include the principles of “no fraud” and “no harm.” It does minoritized people no good to spend most of our energy swatting at malicious fables as Lipstadt had to do. Our collective time is far better spent exploring how to build and maintain an equitable, plural society, not arguing about whether we should have one.

Does this mean foreclosing some debates before all parties are satisfied? Perhaps in some cases it does.

If those parties are a David Irving, a Russell Moore, or No. 45’s latest cabinet nominee, I have to believe they’ll live: their minds are already made up and we have plenty of work to do whether their denial’s resolved or not. The more social power a denier has, the more important it is that the rest of us not build our lives on legitimized lies about each other or the history we share.

We owe ourselves reality, and denial can’t get us there no matter who its purveyors are.