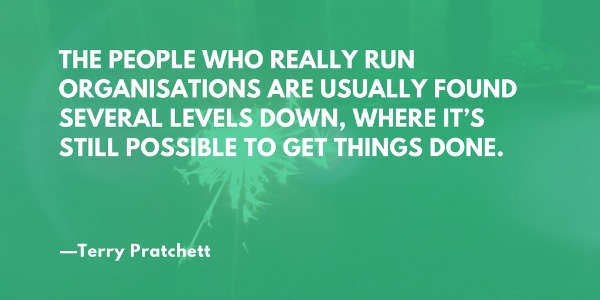 The PG version of one of my favorite pieces of life advice is “Never annoy the secretary.”

It’s from the days when office administrators and managers were rather known as “secretaries,” and hapless visitors underestimated just how essential these staff members were to the smooth functioning of the office. Distracted by the glitter and shine of class, rank, and conventional authority, someone might learn how easily paperwork can go astray, how variably messages can reach their intended recipients if left unshepherded, and how important it is to acknowledge others’ full humanity no matter where they sit around the organizational table.

The recent 1960s nostalgic series Mad Men includes several moments where the secretarial pool exercises its power from below over executives—almost all men—who assume that their formal titles and conventional authority mean that what actually happens in their world is up to them.

I’ve been fascinated by these power dynamics for years. Perhaps what started my curiosity was watching majority-female congregations being run by men who kept voting to exclude women from the highest formal roles in their tradition. Yet major actions in those congregations didn’t happen without the buy-in of the older women in the community, some of whom were eventually endorsed as elders.

Native people are maintaining their socio-political and spiritual resistance to the powers that have been destroying them since the 15th Century. Women are marching, and scientists and LGBTQ people now plan to do the same. In this climate, business as usual seems impossible because those without conventional power are simply too fed up to permit it.

The national park service social media teams (and those writing in their name), and EPA staff with them, are all responding to new White House restrictions with much more passion and concern than I would have predicted even a week ago. And, even if the probabilities aren’t ours, I can’t help but hope that this energy means that ordinary people “several levels down” from the new president and his administration are about to get good things done.