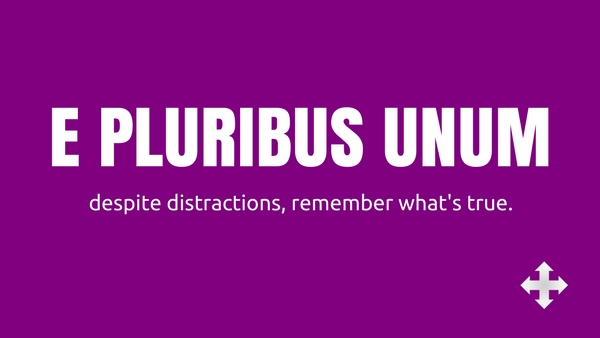 Out of many, one.

The 44th President of the United States used the Great Seal motto E pluribus unum in his pre-2009 speeches. He used it to encourage audiences to recognize their part in his “we.” When he said “we the people” and “yes we can,” he wanted people to imagine themselves in the number. Out of many, one, he said, insisting on our interconnection and mutual responsibility.

These aren’t ideals that the US has ever fully manifested, and the nation certainly didn’t manifest them during the Obama era.

But they’re still ideals worth leaning into, even in the era of No. 45 and perhaps now especially so.

After singing a round based on this motto today at noon, I looked up its history and came across this thought from Pythagoras and Cicero: “When each person loves the other as much as himself, it makes one out of many.”

These ancient philosophers had much to say about friendship in a well-ordered society; Aristotle even later wrote that friendship was about the reuniting of separated souls. But here Cicero suggests that the basis of friendship is love, and not a facile, selfish kind of love, but a love that’s invested in the well-being of the other.

These philosophers also imagined that such a love could coexist with perennial colonization and enslavement. They were mistaken.

In our own time, we have the amazing opportunity now to allow all distractions and drama to pass us by, and to focus instead on what’s true. No part of society can hide away from macro trends. Wealth inequity impacts the janitor and the dentist in different ways but it affects them both. The prison system affects detainees and guards in different ways but dehumanizes them all.

And we’re entering into a time when some members of our society might be tempted to imagine that policies directed at others won’t ever sweep them up too. They’ll be mistaken.

What’s true is that we’re connected. We may vary in our demographics and our circumstances but inasmuch as we’re part of a society together, we are one.

Let that truth ground your actions through the next 100 days, the next 4-8 years, and whatever else may come.