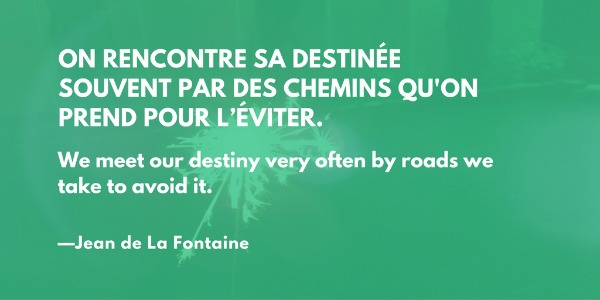 Jean de La Fontaine was a 17th Century verse- and fable-writer who spun ancient Greek tales into the rhythms of modern French poetry. One of the verses he’s most famous for describes the interactions between belief, avoidance, and inevitability:

We meet our destiny very often by roads we take to avoid it.” —Jean de La Fontaine, The Fables, Book VII, fable 16

Fable 16 begins with a story about a man who sought to learn the destiny of his beloved son. Informed that his son will die, the man tries ardently to prevent that outcome, and he becomes overprotective. But he cannot avert his son’s “destiny,” and the son dies albeit in a slightly different way than expected.

“Caution blindly meant to shun that sad event” has no impact on the eventual outcome because “men fulfil the very fears engendered [by] prophecies.” Avoidance is merely delay.

The Christian apostle Paul once wrote that he’d never have thought of specific acts or been tempted to commit them if it weren’t for rules forbidding them. Then as today, a protective hedge provokes at least a few people to breach its boundary, and telling people not to think of purple elephants only invokes purple elephants everywhere.

It’s easy to interpret vague predictions after the fact as though they’d been specific. It’s also easy to defer our ability to choose and creatively respond in the present because of what we expect will happen tomorrow. Perhaps at least part of the basis for the gospels’ teaching on eschewing fearful living boils down to the fact that fearing for the future doesn’t enable one to master today.

La Fontaine ends his verse arguing that we aren’t fixed in any trajectory, but have the capacity to choose and to respond creatively to life as it comes.

Both expectations of inevitable progress or predictions of inevitable demise can diminish our sense of response-ability. Nothing seems to make us less likely to act than the sense that others pull our strings, even when those others are “the stars” La Fontaine wrote about or the gods themselves.