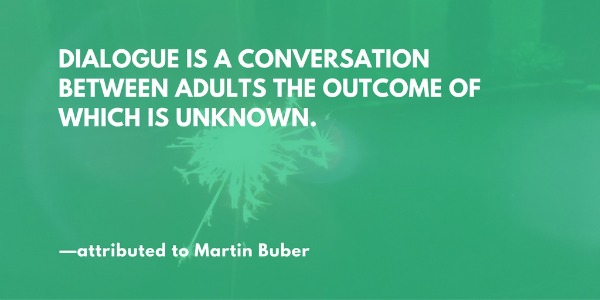 “Dialogue is a conversation between adults the outcome of which is unknown.” I don’t know whether Buber ever wrote this: I couldn’t find a source text for it. But it’s a smart thought, and a hard thing to practice.

Enduring social debates range from whether to recognize climate change and take action to mitigate it to whether to acknowledge the LGBTQ members of the Church and, if so, how to make room for their participation in Church life.

Sometimes it’s hard not to imagine that all of these debates could be retired with vintage jerseys if only someone in the room, preferably the Other Guy, experienced what the early Quakers called convincement.

Christian theological contexts and the US public sphere are both set up for that moment when light dawns, a voice from above speaks, and a former antagonist switches sides, convinced by raw logic and shiny truth.

If only they would circle back and say to us, as Francis Hogwill once said, “My eyes were opened.”

But holding onto that hope for others, even if they are in fact dead wrong, isn’t a good basis for conversation. It doesn’t change minds or open hearts.

The idea remains solid in many movements that the path to change involves convincing people to change their minds… Philosophically, entering dialogue entails a willingness, however small, to be changed by the process.” —Miki Kashtan

What’s scary about this idea is the risk of change. As much as many activists want change, not many of us want to change. Our positions have been hard-won and we have the scars to show for them. Our antagonists have put us through hell. What’s the point of even sitting down with them, especially if we’re going to give up the hope that they might one day agree with us?

In a society that prefers convincement to walking with others toward the unknown, some of us will give up conversation altogether. I get that. In some of my relationships I’ve done it too.

For me, that means being willing to explore how much I’m open to being changed in relationship with people I know who’ve been hostile and antagonistic and are sure that they’re right to be.

It’s terrible. I hate it. I’m doing it anyway.

I’ll let you know how it goes.