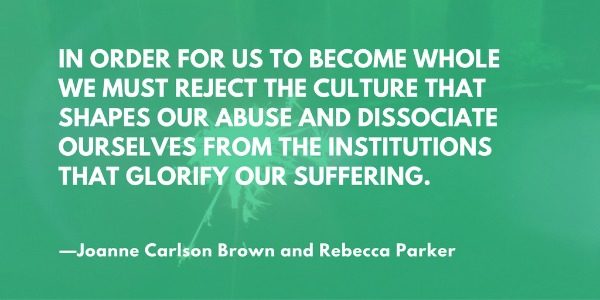 In the classic book Christianity, Patriarchy, and Abuse, several writers and feminist theologians discuss how Christianity teaches people, particularly women, to accept suffering as a utility for spiritual growth or an explicit virtue modeled by God Godself through Jesus.

This was a theme that I and Herb Montgomery addressed during our talks at the Spectrum Conference on atonement and nonviolence this fall.

In the first chapter-essay, coauthors Joanne Carlson Brown and Rebecca Parker broach the conundrum that people who want to keep participating in religion face: we have to determine whether our faiths are fundamentally flawed or simply complicit with cultural oppressive patterns. Neither is a fun conclusion to come to.

As we make that determination, though, we have to be careful that we don’t simply become apologists, making shallow excuses for our religions as Brown and Parker say: “they don’t mean it; they said they were sorry and would be better; they need me/us; we can fix it if we just try harder and are better; I’d leave but how can I survive outside; we have nowhere else to go.”

I’ve heard the latter few justifications several times in the last five years, and may have made some myself, while male ministers have debated whether female colleagues who share similar and sometimes greater workloads should receive the same denominational credential as they do. The denomination has declined to treat all of its ministers equally, and ministers and members alike make comments like “Leaving this church would leave me in cold isolation.” It’s not just women’s imaginations that are limited in this system—the source of the quote in the previous sentence is a man who’s invested almost 40 years in denominational work and cannot imagine a whole, healthy life without it. That concerns me as much as I imagine it would concern Brown and Parker.

“Only if the church is the place where cycles of abuse are named, condemned, and broken can it be a haven of blessing and a place of peace for women. That the church is such a place is not clearly evident.” —Joanne Carlson Brown and Rebecca Parker

While these authors come to bleak conclusions about the historical Christian tradition, they also counter-propose a compelling vision of how Christianity and Christians can express faith that “frees” people instead of “imprisoning” them in the assumption that the best they can hope for in life is enduring suffering patiently.

As I continue my public faith work, I keep asking and beimg asked the question “Why stay?” My answers have changed since I first began my work, but still boil down to this:

If I can be a counter-illustration just by showing up, that’s fun; if I can cooperate with others in the spaces between the bricks and logs of an institution carrying on as normal, that’s great; and if either of those things is no longer true, I will stop. (“When faith fails, people move on.“)

In the meantime, it’s better for me not to daydream about changing the character of a multi-million-member organization from the edge: you have to be in the center to do that, and the center turns much too slowly for the kinds of people I’m committed to.

But out on the edges, when we recognize people are overtly suffering and where we can take much more fluid direct action, we don’t need permission to work with them, and we don’t have to wait for the fundamental logic of the institution to change. We can acknowledge the system’s gifts and weaknesses with clarity, and work without flinching with all the people, not just those our institutions deign to include.