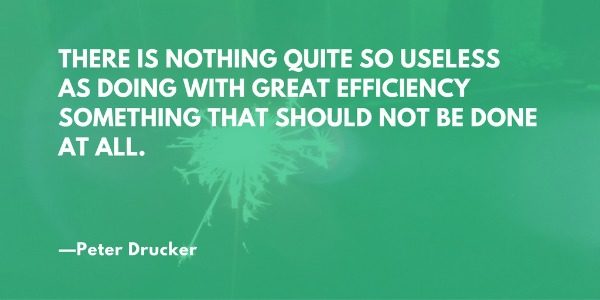 Peter Drucker was a legendary management consultant, professor, and writer who, like quality improvement’s W. Edwards Deming, guided the corporate world for more than 60 years.

As a consultant to corporate managers, Drucker broke down common business habits, myths, and hunches so that managers and their organizations could rightly center people—both employees and clients.

He was also a master of the pithy quote:

I learned the saying “There is nothing quite so useless as doing with great efficiency something that should not be done at all” from Basecamp cofounder Jason Fried. Lately, Fried has been reflecting on the value of “outsourcing the rest”: saying no to tasks that don’t rightly reside with us so that we have energy and attention to devote to tasks that are ours.

Assuming you can put in more hours than someone, or work harder than someone else, is giving yourself too much credit for your effort and not enough for theirs.

Hours are never the differentiator — it’s never about working more hours than someone else. It’s about the decisions you make. How you spend your time, what you do and don’t do. Especially what you don’t do.” —Jason Fried

Fried has noticed that strategic effort is much more effective than dogged effort, yet even he finds himself over-eager to shovel show before the snow shower is over. When he does this, his work doesn’t produce the results he wants and he makes extra work for himself: the exact opposite of what he set out to do!

We each get to set our priorities for our time, and if we pay attention, we can recognize that staying later and later doesn’t guarantee us better quality.

Instead, as much as possible, it’s worth assigning our non-renewable time to those activities and people who support our higher goals, not drooling it away on work that doesn’t matter much.

As we start the quick slide toward the end of this year, I’m starting to think about efforts of mine that were worthy and all the dogged trudging that wasn’t. I’ll be setting new targets, and I expect the activities I say Yes and No to will change for January.

What about you? Send me a note on Twitter, and share what you’ve learned about your priorities and time this year.