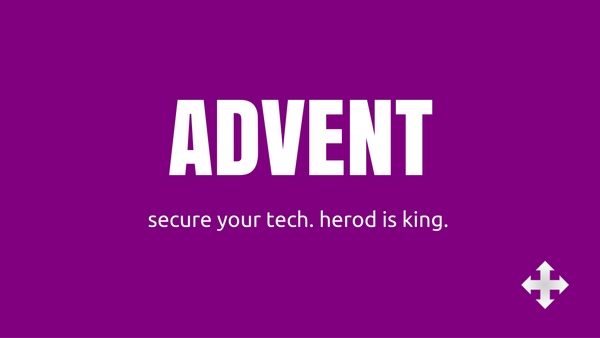 The Advent story in the Gospel according to Matthew takes a curious turn when foreign “wise men” show up and begin interacting with King Herod the Great.

According to Matthew, these foreign visitors first journey to Herod’s palace to inquire about Jesus. Then, after dreams warn them that Herod has only malevolent interest in Jesus, they avoid giving him any further intelligence, and leave the area in a hot hurry while Jesus’ family flees with him abroad.

Our world has shifted so much that when I retell that story in the shadow of US-VISIT, the NSA, PRISM, and Edward Snowden, a former Booz Hamilton contractor who breached the US Espionage Act and has sought shelter in Russia since 2013, this part of the Advent story doesn’t seem so odd anymore.

I’ve often wondered what an autocrat like Herod would have done if he’d had the power that the contemporary United States has: to compel biometric identification, to monitor mass telecommunications, to hoover up metadata across communication devices and the internet, and to surveil members of the public both above and below the radar.

Today, governments around the world have technological tools and political powers that ancient rulers would have drooled over.

We get to decide how we’ll respond.

Preparing to live under a hostile administration today includes securing oneself and one’s community as much as possible from on- and offline surveillance. We all benefit from good security practices regardless of whether we’d self-identify as activists or as threatening to the mainstream.

The US recently spent a lot of money, energy, and time monitoring peace activists in Seattle; government monitoring of civil rights groups is legendary; and that surveillance has continued with rising Black resistance to state violence.

“If you are privileged and not a minority, your marginalized friends will be safer if you all use privacy tools. The more normalized it is to use them, the harder it is for a system that perpetuates injustice to single out people they don’t like.” —Daniel Oliver (November 10, 2016) [Expletive advisory]

While digital privacy and security activists and developers keep working on the policy context we have to operate in, ordinary internet and phone users can take a few small yet high-value action steps that have a broad impact:

Companies and internet service providers often have data and technology use restrictions, but there are additional layers to it because of the federal climate over the last fifteen years. In that same period, justice workers and peacemakers have been subject to federal phone taps and other kinds of technological monitoring and all of the major wireless networks have been complicit.

Information and digital security are fascinating fields to read about. Check out some recent articles that could be useful to you, no matter what your technological comfort level is.

Be safe out there.