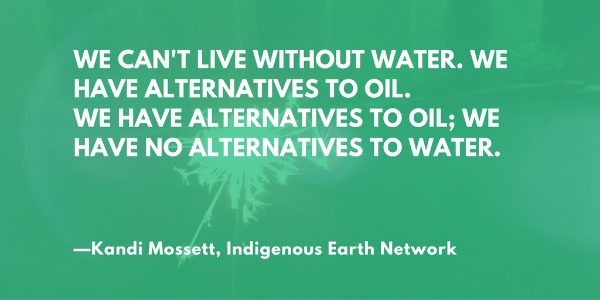 She describes the way the National Guard, police from five states, Energy Transfer Partners, and the Dakota Access corporation have corralled indigenous people in camps near DA Pipeline construction. And she calls for trans-ethnic solidarity.

[These states are] sending their police forces over here to protect an oil industry pipeline which is becoming obsolete before it’s even built.

The price of oil has dropped so low. The amount of oil that’s being pumped out of the Bakken Shale Formation is so low that this pipeline is becoming obsolete before it’s even constructed. There are charts; there are graphs that show that they may not even need this pipeline.

And so why they’re continuing to allow it is beyond me.

Mossett’s update is 16 minutes long, and includes some graphic reports of violent policing. It is auto-captioned.

She also encourages continuing donations to the Indigenous Environmental Network of Turtle Island‘s Indigenous Rising project and to Sacred Stone Camp. The costs of this disruption are significant and water protectors shouldn’t face them alone.

We need people to come because the Missouri River is right there, and we need people to help us to protect the Missouri River. For the 18 million people that are downstream, for the millions more that are downstream of [them], we need President Obama to demand a full environmental impact statement. We need the Department of Justice to come out here and see what’s happening to us. We need you to go to your Army Corps of Engineers offices and we need your help…

We never give up hope… Send your support any way you can.” —Kandi Mossett