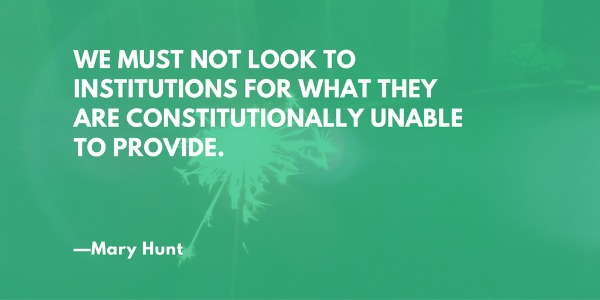 He then explains that even if a parent might answer their children’s needs with futility and poison, God gives “good things to those who ask.”

This teaching depends on our accepting that people aren’t always generous, sensitive, or aware. Sometimes we’re obtuse, unconscious of the mismatch between what others need and what we’re offering them. And sometimes we’re simply cruel or dismissive: we notice the mismatch yet don’t care enough to resolve it.

Interacting with other people, and operating in institutions as members or as staff, can bring plenty of chances to practice the Angelou principle. Accepting what others declare about themselves in word or deed can make our lives so much more straightforward, and it can relieve some of the pain that comes from unmet expectations.

My friend and colleague Daneen Akers recently wrote about how she’s been able to relieve her disappointments with our denomination: she now seeks nourishment in places other than those where she typically serves. She has learned to separate these two facets of community—support and service—and she no longer looks for bread on shelves where only stones are arrayed.

Two sayings are relevant. Speaking of her own church, Mary Hunt once wrote bluntly: “We must not look to institutions for what they are constitutionally unable to provide.” Robert Heinlein approached the concept with more of a chuckle: “Never attempt to teach a pig to sing; it wastes your time and annoys the pig.”

Given that every deep change involves discomfort, disagreement, and pushback, it’s important not to assess what possible for an institution, another person, or ourselves from a posture of cynicism. Cynicism doesn’t support good observation or interpretation.

But when we have soundly identified what’s core for the people or groups we’re trying to engage, it’s worth letting that information guide how we interact with them. It’s another way to make decisions based on fact rather than mere wishes or projection.

Facts aren’t the end of the stories we co-write with others, but in the name of sobriety and mutual respect, we do need to account for them somehow.