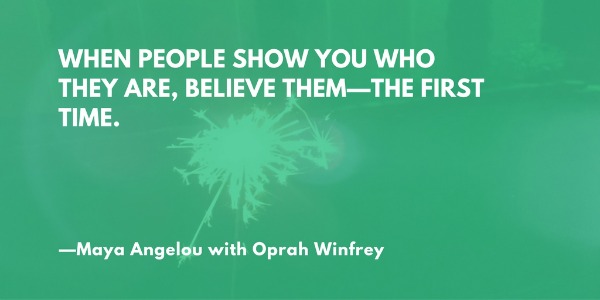 When I first heard Maya Angelou teaching Oprah Winfrey, “When people show you who they are, believe them,” I said amen with the rest of the viewers.

Believe them! They know themselves much better than you do.” —Maya Angelou

Just as Winfrey said, though, it’s a lesson that can be easy to affirm and challenging to apply.

People and organizations set the level they’re willing to operate at. And in both subtle and unsubtle ways, we all let others know what our level is.

A corollary to this principle is that sometimes what’s good doesn’t want to become great, and we don’t necessarily gain by trying to cajole it into wanting to.

Jim Collins‘ From Good to Great was one of the standout business management books of the mid-2000s. It highlighted eleven companies that had by then significantly outperformed their competitors for a decade and a half. Collins argued that they achieved this success metric by focusing on their most profitable skills, ensuring that their team included the right people playing the right roles, and facing up to “the brutal facts of [their] current reality, whatever they might be.”

Whether we’re in the personal sphere or doing business, we have to allow facts to supersede our preconceptions and shape the decisions we make. We can’t approach our own greatness, whatever that means for us, unless we allow that.

And that means “confronting the facts” and believing others when they declare who and what they are, even and especially if the facts are unpleasant.