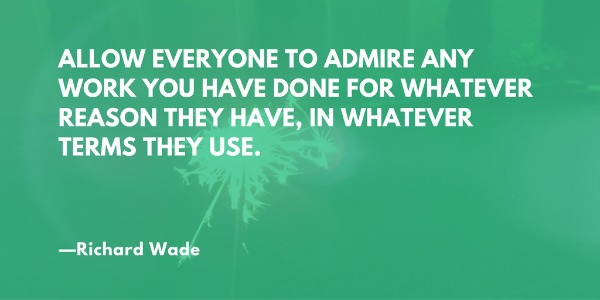 This morning, I came across an old advice column from one of the humanist Patheos blogs. A former Christian songwriter wrote in with some distress about hyper-religious fan praise for his oldest work, work he has since outgrown himself.

Because I recorded a couple of Christian albums, years ago, both certified gold, I have a following; people recognize me and assume I’m still a Christian. I have a Facebook fan page, where I can let fans know what I’m up to. But so many of them are devout Christians who post messages like, ‘Continue to do the Lord’s work!’ and ‘We thank the Lord for your ministry!’ But I don’t have [a] ministry! If they merely write ‘God bless you’ or something, that’s fine. But I’ve been deleting the more sanctimonious messages, because I just can’t stand them.”

This was the columnist’s response:

For centuries, artists and composers have been producing both secular and sacred art and music. For many of them, it is impossible for us to know how devoutly and sincerely they believed in the religion they were glorifying. Certainly many did, but it is likely that some did not. For some perhaps, it was never more than a gig; they did it for the money. They had to paint landscapes or saints; they had to write quartets or hymns. They had to eat.

But that makes no difference. Regardless of their private thoughts and innermost feelings, by their talent and their hard work they produced great things. Their creations give both believers and skeptics experiences of awe, astonishment, inspiration, insight, and sheer pleasure…

You don’t have to refute their beliefs or reinforce them. Take a couple of deep, slow breaths, and thank them just as you do the less overtly religious ones. Allow everyone to admire any work you have done for whatever reason they have, in whatever terms they use.” —Richard Wade

Creating steadily for years and having a rapid growth process means outgrowing your own stuff sooner or later. In fact, one of my mentors has said that should be the goal: to be at least a little strange to your Five-Years-Younger Self. I’m sure I’m winning that game!

Creating steadily for years also means generating entire audiences of people whose responses to your work you can’t control. I’ve been writing on the internet for at least a decade now, and while I closed my original weblog, there are still traces of it and my forums phase online. And I’ve been writing and speaking offline for more than twice as long. I gave my first sermon when I was 18 years old so there are still people whose perception of me is fixed to that event.

A funny thing happened with that sermon. I wrote it for oral delivery and, with some encouragement from relatives and friends, revised it for print and submitted it to a religious journal. The editor at the time took pity on me and paid me for it, but it didn’t actually run for another five years.

By the time it ran, I’d forgotten about it: it had simply become That Time I Wrote A Thing And Got US Dollars In Return. I was on my way to a congressional internship when the journal’s office asked me for an updated bio, and when it ran, I reread it.

I was mortified. It was, I thought, facile. And hokey. And the theology in the last two sections was dead-wrong.

I wanted to hide, and my audience wanted to send me flowers.

Shortly afterwards, the same office asked me to contribute to a new project, so I was able to express some of my new wine in a wine-skin that was less stale. But if they’d never done so, I would just have had to make my own peace with an old version of myself showing up in the mirrors of Google.

Even today, I still run into people who associate me with the first article and not the second, or with congregational work I did in England, Jamaica, or West Texas, not anything I’ve contributed to in the mid-Atlantic over the last few years. There are people in the first group who don’t follow my work now, and others who actively resent my growth arc over the last decade and a half.

There’s a generosity that’s necessary to get through this. This morning I called it “grace,” but I’m not sure that’s right. It’s not unmerited. It’s not disproportionate. It’s not arbitrary or unfair.

Instead it’s truly a generosity of heart, an openness and spaciousness we can offer ourselves and therefore also offer others. There is room enough in this world for me to grow and for others to experience. I not only can’t stage-manage their experiences; I also don’t need to.

The energy I might invest in being embarrassed about past work is energy I don’t have to create something new for today that fits my values and communities more effectively. The attention I might spend on others’ limited perceptions of me is attention I can’t devote to audiences who appreciate and trust my voice and perspectives.

And more: focusing on what no longer fits can undermine our ability to acknowledge and build on the good our past or current contributions have already brought to the world. As Wade wrote to his correspondent, “by [artists’] talent and their hard work they produced great things.”

That good is not diminished because we grew up. And we get to be generous with others who are (sometimes despite themselves) growing up too.