Read my article on the body and the private sphere.

This year, we turn to Miroslav Volf’s latest work, Flourishing: Why we need religion in a globalized world.

The book is Volf’s ambitious attempt to integrate reflections on the relationships between globalization and religion and ways world religions can undermine or support human development. Based on his classes at Yale Divinity School, including a course he co-taught with former British Prime Minister Tony Blair, Flourishing also depends on several international and multi-faith review groups that Volf invited to assess the manuscript. He gives extensive credit to his research assistants and graduate students, a move that I appreciated.

At least in the preface and introduction, whereas Volf defines and delimits religion, he does not define globalization. When he writes “globalization,” does he mean something more substantial than “international and trans-national trade”? I assume so, but in the absence of definition, the term is a cipher that readers can fill more or less as they please, whether with Blair’s modern Western liberalism, with the UN’s sustainable development tenets, or with other signifiers like “freedom, democracy, human rights, market economics, and prosperity” (p. 5). In notes, Volf does mention Joerg Rieger, who wrote the brief Globalization and Theology.

Volf tells us his colleague Linn Tonstad encouraged him to make his positioning explicit:

I could have tried to shed the particularities of my own faith and culture and to survey the landscapes of multiple religions and globalization processes impartially, as if I were a mechanical drone with no biases or interests of my own. But the ‘view from nowhere’ is impossible; drones always fly at somebody’s behest and for somebody’s interest.” —Miroslav Volf, Flourishing, p. 18

I’ll learn more as I read. I already wonder whether Volf takes too much about globalization for granted. And I don’t think he could possibly be right to exclude indigenous and non-conquering religions from his grand synthesis of the future of religions or flourishing humans: we already have enough practical theory based on the praise songs of war winners.

Update: My commentary came out the first week of August. Read with us. 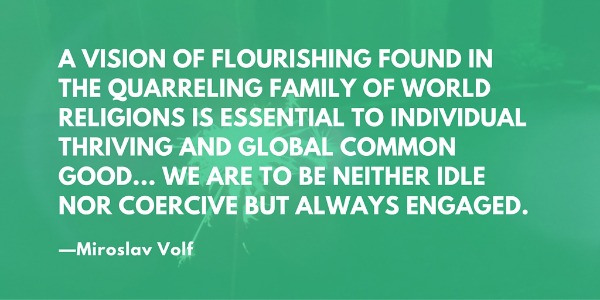