One of my favorite parts of Brother Outsider, a feature documentary on the life and work of Bayard Rustin, comes in the film’s first five minutes. [Uncaptioned teaser clip.]

“We need in every community,” Rustin says, “a group of angelic troublemakers. Our power is in our ability to make things unworkable. The only weapon we have is our bodies, and we need to tuck them in places so wheels don’t turn.”

Like his mentor A.J. Muste, Rustin believed that changing society to benefit the vulnerable, oppressed, and disadvantaged required both affirmative policy and creative, nonviolent disruption.

Rustin made specific legislative demands and encouraged in-system lobbying and electoral pressure. At the same time, he literally sat in at seated demonstrations, walked the streets in protests, and organized hundreds of thousands of people in the 1963 March on Washington for Jobs and Freedom. He used his body and mind to construct the world he envisioned and also to disrupt and obstruct a system that he believed no longer worked and therefore should no longer function.

I’d classify this leadership approach as chaotic good. Chaotic good is one of nine modes of relating to good, evil, and law originally part of the Generation X game Dungeons and Dragons. (While I’ve never played the game, I learned about the alignment schema through memes about comic, Star Trek, and other film characters.)

A chaotic good character is committed to protecting people and limiting suffering, and is likely to honor laws when they serve that larger principle and overrule laws when they don’t. This is in the same tradition as that great maxim, “The Sabbath was made for man, not man for the Sabbath.”

Change-makers working through the highly structured non-profit sector and grassroots organizers with their own rules for disciplined action don’t always respond well to creative chaos. It’s unsettling. It’s unpredictable. And most of all, it rarely yields to external controls or attempts to systematize.

These are the very traits that make it worthy of respect and conscious use. Chaotic good helps us to break up any order that’s no longer beneficial, and it motivates us to generate new operating principles that are.

That’s why, working with the mode of chaotic good, we have to keep the good in focus. The good is our priority. Our priority is not merely destabilizing the calcified structures interposed between us and our good, even when we understand that destabilization is necessary for what is good, true, and sustainable to grow.

As Miki Kashtan puts it:

At all times, we can move towards what we want by initiating and sustaining actions and projects grounded in our deepest vision… Knowing what we are working towards allows us to bring all the love we have to our actions and [to] act with care for others’ well-being.” 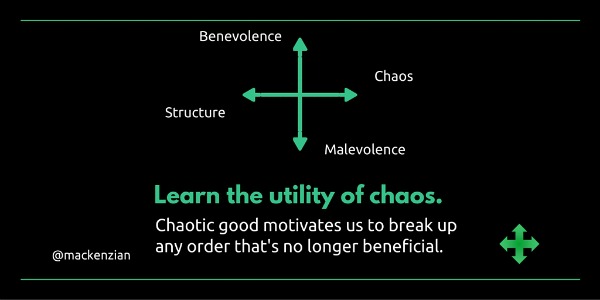