Every decision is a vote cast for the future we wish to live in… Every action we take should be a vote for the Beloved Community we wish to create.” —Hugh Hollowell

There’s a conundrum I’ve been turning over that’s reinforced for me every time I go to a park like Muir Woods or the Grand Canyon. The trees and the rocks and the quiet away from the city and the suburbs remind me just how young humans are, how brief our lives, how short our eras are in the grand scheme. This is a question of scale and perspective.

I also work with a number of social change initiatives. I enjoy learning about how history informs the present and I’m attentive to the contemporary conditions that we’re asking one another to live and grow in now. No matter how long a person’s life, no matter how comfortable their social location, they’re unique and meaningful simply because they’re here. I’ve never recovered from the first genocide I ever saw in my lifetime. It was one too many, and every genocide and war since has been one too many as well. This, too, is a question of scale and perspective, and it’s also a question of collective effort.

It takes all of us in one way or another to keep the status quo humming along. Just a few months ago, I paid a good chunk of federal taxes, and as a small business owner, I have to do so again next week. I have no qualms about 59% of that money supporting social programs, but I’m not at peace with the entire budget. My labor and revenue fund domestic and foreign policies I think are imperial, immoral, and incompatible with justice, humanitarianism, and sustainability.

So every time I pay in, I’m putting a few more hundred dollars into the way that things are, as do we all, not just when we pay federal or state taxes, but also as we buy and sell locally. A few hundred dollars might not be much of $3.7 trillion, but there are millions of us paying in. We’re why the Department of Defense can afford “fast, resilient microdrones that can be kicked out the back of a fighter jet moving at Mach .9.” We’re why there are funds, however few, to allocate to the National Science Foundation’s research grant accounts, and to buy FEMA more tents, and to maintain NOAA’s satellites.

Social change work is like running up the down escalator.

When asked about his work ethic, actor Will Smith once replied, “I am not afraid to die on a treadmill.” When I heard that, I laughed, but it’s also probably true. He has drive, he’s persistent, and I’m not sure anyone could stop him from achieving something he was determined to do. Any projects he’s passionate about will reap from that.

Hugh Hollowell is the executive director of Love Wins Ministries, a non-profit in Raleigh, North Carolina that builds community with unhoused people. He might also be the strongest critic of the snooze button I know. Around the time I met him, he wrote, “I am up against people who wake up at 6 a.m. and decide which minority group they are gonna screw over today. Why did I sleep in?” A few years later, he said, “While you were sleeping in, some CEO got up on time, ate his Wheaties, and planned a layoff or something.”

I laughed at that too, but it was a drier laugh.

I knew that those working against the perpetual motion machine of injustice have to have discipline.

We have to be focused.

We have to manage our energy.

I won’t say we have to get up at 6 a.m. (I’m still in denial!), but Hugh and I agree that we each need to figure out our best daily hours and deploy them in the service of all that’s good.

We get to bring our social compassion home to ourselves and our families.

We also get to eat and sleep and play, no less than others gifted life on our planet.

And somehow, we have to sustain a patience that the status quo doesn’t deserve, a patience that depends on someone somewhere still suffering in some way while we find the escalator’s emergency stop button and get all our people onto the right flight of moving stairs. I hate that.

I also know that without discipline and consistency, there can be no progress.

And while my daily schedule might seem like a tiny thing in the long shadow of life here, I’m beginning to suspect that Hugh is right, and the consistent will inherit the Earth. 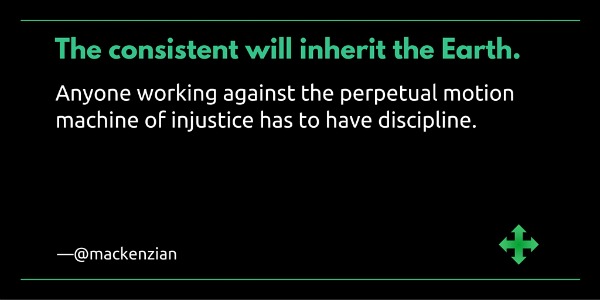